The 9000 features a large control wheel around the top LCD display. It has four settings: Program, A, Manual, and S. Program mode automatically chooses what the camera thinks is the best shutter speed and aperture combination, A (Aperture priority) mode lets you choose the aperture while the camera chooses the shutter speed, S (Shutter priority) mode lets you choose the shutter speed while the camera chooses the aperture, and Manual mode forces you to choose both shutter speed and aperture manually (although with help from the built-in meter). To set the modes, rotate the wheel so the text is aligned with the arrow.

The Program mode is the point-and-shoot mode. The camera decides the exposure for itself, using the light metering mode you have specified. It also takes the focal length in account, using something that is called "Auto multi-program selection". What this means in practice is that:

While in Program mode, you can use the "program shift" feature. Simply, this means that the relationship between shutter speed and aperture is changed, while the total exposure remains exactly the same. For example, if you want to freeze motion with a faster shutter speed, shift to a larger aperture and the camera will automatically set a faster shutter speed to balance it and maintain the same relative exposure. This makes it a perfect tool for easy adjustment of depth of field or shutter speed while keeping the full automation of the camera. To use it, just use the shutter speed or aperture control levers to set any value you want and watch the other value change. "P" in the viewfinder blinks to indicate when program shift is in use.

In A (Aperture priority) mode, you select the aperture and the camera automatically sets the shutter speed required for proper exposure. Any aperture available on the lens can be set. This mode can be used when you want to control the range of sharpness (i.e., depth of field) in a photograph, as for making a large part of the scene sharply focused or emphasizing a subject against an out-of-focus background. You can read more about this in the sections "the aperture" and "controlling depth of field".

In S (Shutter priority) mode, you select the shutter and the camera automatically sets the aperture required for proper exposure. Any available shutter speed from 1/4000 sec. to 30 seconds can be set. This mode can be used when you want to control the shutter speed exactly, such as when you photograph a moving subject.

In the Manual mode, you have complete manual control over the shutter speed and aperture. You have to set them manually with the aperture and shutter speed levers. Even if the camera will still meter, giving you information about the correct exposure, you can choose to override it. The exposure-deviation indicator appears in the viewfinder when the meter is on (touch the shutter-release button to activate it). For normal exposure based on the camera's TTL meter, adjust the up/down controls as indicated in the viewfinder. Some typical readouts are:

It must be noted (again) that the exposure-deviation indicator is according to what the camera's meter thinks and doesn't represent an "ideal" exposure -- you have to judge that yourself, and that's what the "Manual" mode is (mostly) about. 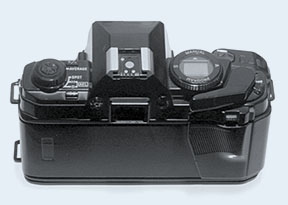 Here are the four possible positions of the control wheel. The upper value is the shutter speed, the lower is the aperture. A small arrow besides the number indicates which setting you can alter in the currently selected mode.

The exposure-deviation indicator is the number to the right of the "M" symbol in the viewfinder. It always appears in manual mode, as well as in all other modes when exposure compensation is set. "+2.5" here indicates that the exposure is set for 2.5 stops greater than required for a normal exposure. Set the camera's shutter speed and aperture so that the exposure deviation indicator shows "0" to expose according to the camera's meter.